Objective
This session can be used as part of the warm up working on quick movements with and without the ball and within a competitive situation. Using games / competitive sessions can be a good way to engage the players at the start of the session.

Set Up – 1st Part
The objective of this part of the session is for the players to work on their quick movement with and without the ball. Taking the ball from the middle area and dribbling the ball back into their own area. The first player to transfer 3 balls back into their area will be the winner.

The area is set up as within Diagram 1. Four players start within their area, with 9 balls in the middle. On the call of the coach the players will run to the middle, collect a ball, dribble the ball back, leave the ball in their respective areas (must stay in there), and then return back to the middle to collect the ball.
The players must keep control of the ball when dribbling with it.

Progressions
• Limit which foot they can use (i.e. right foot only)
• An exercise when they return to their area after each ball (i.e. chest on the ground)
• Travel in a different ways from own area to the middle area (i.e. backwards)

Set Up – 2nd Part
The session is set up as within the previous session. On this 2 balls are removed and there are now only 7 balls in the area. The aim of the game remains the same (first player to get 3 balls into their area). See Diagram 2. Within this game the players can now steal a ball from other players (from their area). This can stop the other players getting 3 balls into their area and it may also be a quick route to get balls back into your own area.

Progressions
• Limit which foot they can use (i.e. right foot only)
• Exercise after they return to their area after each ball (i.e. back on the ground)

Set Up – 3rd Part
As the session evolves a new condition is introduced into Part 3. The rules regarding 3 balls into the players area and stealing from other players continues. Once they have returned a ball to their won area, the players must make a movement around either one of the red cones before claiming a new ball. See Diagram 3.

Progressions
• Different movements between red cones (i.e. must always be facing the middle part of the area / hopping on one foot etc) 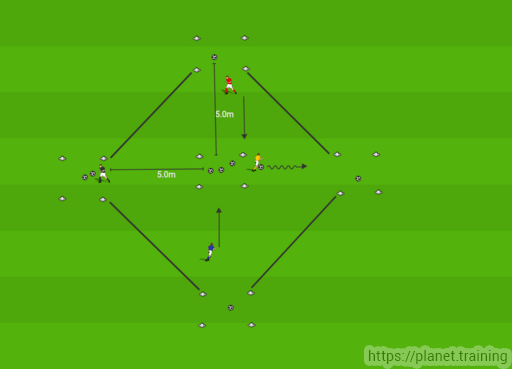 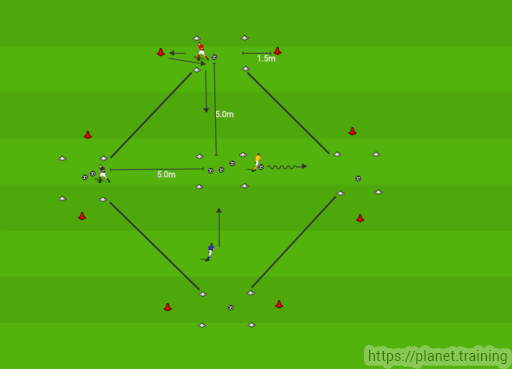 Some Coaching Points
• Speed of movements – foot contact
• First 3 steps (Distance, body shape)
• Deceleration on approach to ball
• Control of the ball between areas
• Awareness of next movement and other players footballs