Races with and without the ball

Objective
This session focus’s on putting players into competitive races, which can challenges aspects of movement including their acceleration, deceleration, speed and movement. This session can be used as part of the warm-up.

Set Up – Races without the ball
The session is set up with a middle area (home) with 3 poles, depending on the number of players involved. Each pole will have a colour, which is allocated to each one of the players. Then there is 4 other areas, with the relevant coloured cones making up the area, which the players will be collecting and returning to the home area (placing them on the respective pole). The areas outside the home area can be anything up to 30yds award, with the cones being placed approx 3yds within each other.

The players can only return one cone at a time and the must go round another pole before going out to collect another cone. First player to collect all 4 cones wins. See Diagram 1

Set Up – Races with the ball
The session is set up as within the previous session. On this occasion a ball is introduced, so the player will run with the ball to collect the cone and return back into the area with the ball. See Diagram 2.

Set Up – Races with different movements
The session is set up as within the first session. The players are now required to perform an alternate movement going out to collect the cones (for example – running backwards, jockeying etc). Then they can run forwards when returning back into the middle (home) area. See Diagram 3.

Progressions
• Changing the type of movements when and where 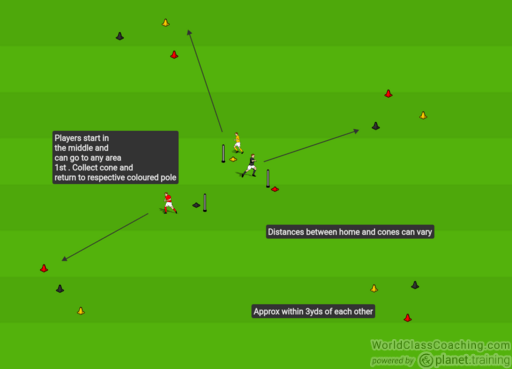 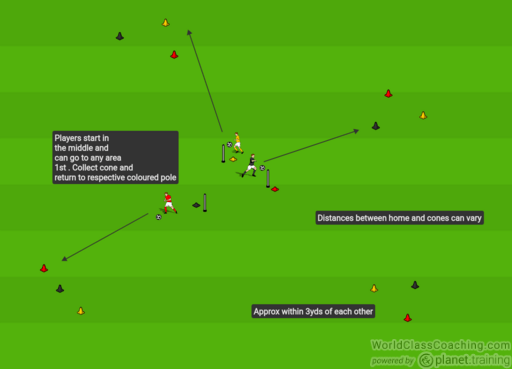 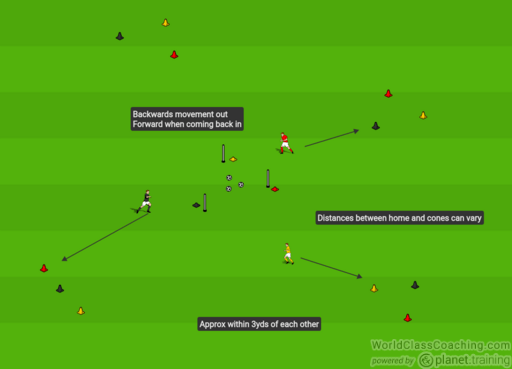