Objective
This session focuses on players breaking out to create a 1v1 opportunity with the Goalkeeper. Developing from an unopposed practice, to a possession and then into a 1v1 with a recovering defender.

Set Up – 1st Part
This session takes place in the middle of the pitch in around the centre circle. Two teams of 4 or 5 are split and there is a goalkeeper positioned each end of the pitch. See Diagram 1.

The first part of the session is unopposed. Within each team a player is given a number (1-4). There is one ball per team and they are asked to pass and move within the area. At any point the coach will call a number and when the opportunity arises a forward pass into space is played for the number selected to run onto to attack the goal (1v1). The objective for the player attacking is to score with the fewest number of touches and within the quickest time.

Set Up – 2nd Part
The next part of the session involves the teams going into a possession within the middle of the pitch. The coach will specify a number of passes to be made before the breakout can occur (for example 5 passes). If the team defending can win the ball before 5 consecutive passes are made, they then have the chance to make 5 passes and break out. To start they can break out to either goal, but they will be constrained on the amount of time they have to score (i.e. 5 seconds)

Set Up – 3rd Part
This part of the session continues from the last, but within this session once the ball has been played forward for an attacking player to breakout. One player on the defending team can make a recovery run to prevent the attacking player scoring. See Diagram 3.

Progressions
• As with the previous sessions
• As the game goes on, the coach can allow an extra attacking to player to create a 2v1. Then also, allow another defender to break out to even the teams up 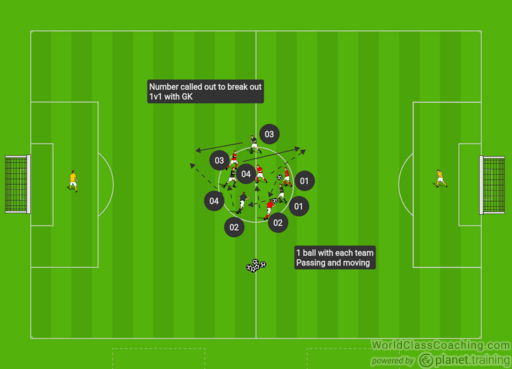 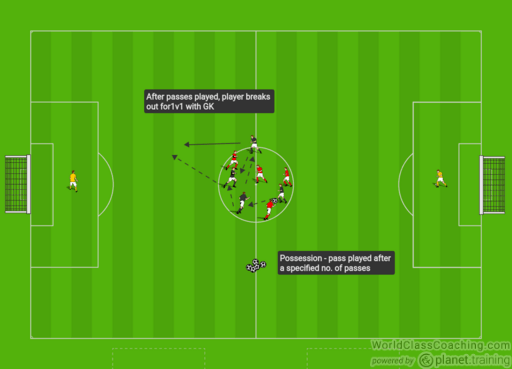 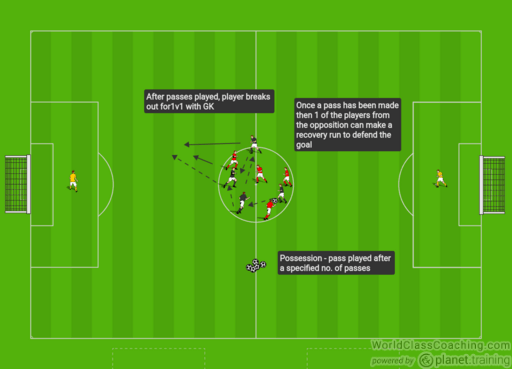 Some Coaching Points
• Tempo of passing
• Angles of movement
• Forward pass into space
• Timing of run, acceleration onto the ball
• First touch into space
• Speed and composure running with the ball (Ball distance allowing the player to run at pace)
• Composure in front of goal
• End product to hit the target